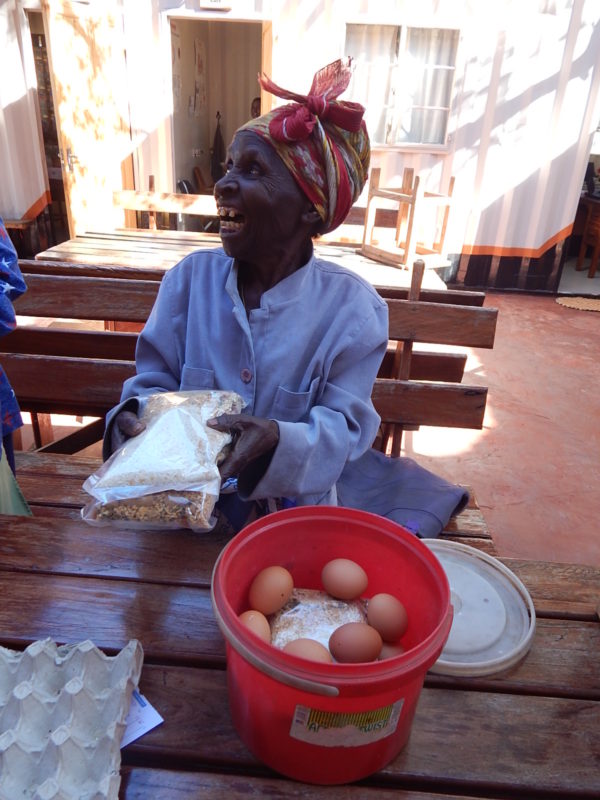 By Jeff Way | Stories | No Comments

One day I was at the warehouse building with the pickup truck dropping something off and as I was about to head back to the farm Bester, the supervisor, stopped me and asked if I could take Gogo Christine to the farm.  Of course I said yes and jumped in the driver’s seat.  I waited for Gogo to get in, but the passenger door didn’t open.  I looked in the rear view mirror and there she was trying to climb into the back of the truck with her bag!

Gogo means grandmother in Shona and Gogo Christine is certainly old enough to be a grandmother, but nobody knows how old she is.  Not even her.  She’s likely in her eighties and lives about 4 miles from the farm at Eden Children’s Village, yet she walks to the clinic at the farm almost every day.  She is about 3 apples tall, has the best face wrinkles ever and is smiling whenever I see her.  She’s the kind of grandmotherly woman you just want to hug.

And there she was trying to climb into the back of the truck!  And the men were helping her!  I jumped out of the truck and stopped them and brought her around to the passenger side, which admittedly I should have done initially, and helped her into her seat.  The look on her face was awesome.  She was so happy and surprised.  I got her buckled in and we drove off and she laughed and talked the four kilometres to the farm.  When we passed people walking she sat up straighter and waved at them, making sure they saw her in the truck.  I felt like I was chauffeuring a queen.  Gogo Christine talked my ear off and had a great time, I laughed and talked back to her, neither of us having a clue what the other was saying, but it was so fun!

When we arrived at the clinic, where she would get some eggs and other food supplements, I helped her out and she was glowing.  Of course everyone there saw her get out of the truck and I’m sure she wanted them to and that’s okay.  It is such a clear memory of mine and for good reason I think.  It was such a small thing for me to give Gogo a ride that day, but what did it mean for her to be given the front seat? It didn’t really sink in till later that such a small act gave her dignity.